The Spanish Inquisition vs. Mysticism

After my foray into the history of Christian mysticism and the wonderful discovery of the women mystics, I wanted to do the same for Judaism. Unfortunately, that search wasn’t as fruitful. Teaching of the Kabbalah—Jewish mysticism—has been traditionally limited to males.

I did follow a faint trail that lead to Ines of Herrera del Duque, a young—pre-adolescent-young—mystic … and the Spanish Inquisition. I’ve always had the idea that the folks condemned by the Inquisition were witches! Maybe that comes from conflating the Inquisition in the Old World with the Salem Witch Trials in the New One. I don’t know. But apparently, witches weren’t the only one’s being burned at the stake in the Old World! Mystics were too!

That is so hard to believe. But the whole purpose of the Spanish Inquisition was to solidify the power of the newly united Spanish nation; the imposition of the Catholic Faith on its population was the unifying vehicle. Because, after all, beliefs—especially religious ones—can be quite powerful.

Starting in the15th century, anyone—Jews and Moslems—who was not Christian, had to leave the newly united Spain or convert. Jews who converted were called conversos, and Muslims who converted were called moriscos. However, as you can imagine, the Inquisition was a great place for folks to seek retribution and vengeance for all sorts of major and minor disagreements with their business competitors, employers, employees, family members, and neighbors.

In the beginning, conversos were most often targeted. Can you imagine being burned at the stake or condemned to prison for life because you cut the fat off your meat, or wore a clean shirt on Saturday, or cooked with oil rather than lard. Wow! Doesn’t that sound CA-RAZE-Y?!?

Back to Ines, the young prophet and visionary who was a converso. In her visions, Ines’s deceased mother accompanied her to Heaven, where she received visions of Jewish liberation. 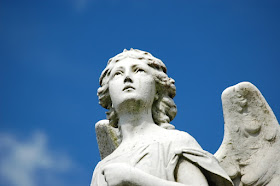 These prophecies awakened hope in the Jewish communities remaining in Spain at the time, and it was not uncommon for people to make pilgrimages to Herrera del Duque to talk to Ines in person.

Queen Isabella and King Ferdinand established the Holy (?) Office of the Inquisition in 1480. Ines was born in 1488. No record of Ines’s appearance before a tribunal has been found, but there is a notation dated August 3, 1500, that the child prophetess of Herrera had been burned. In 1500, she would have been twelve. Testament to her prophecies and the impact they had upon the Jewish communities were documented in the trials of other conversos, including children who played with her and were imprisoned for life despite their youth.

The Inquisition lasted for over 200 years in Spain. That’s a long time; and it seems they ran out of conversos! Who else became popular targets? Mystics—called Alumbrados in Spain. They believed turning inward provided a more direct route to the Divine—the clergy (and all officials of the all-powerful Catholic Church) were mere mortals who they were not obligated to listen to or obey. The majority of the Alumbrados were women. Charismatic women who were extremely threatening to those who wielded financial and political power in Spain … and wanted to keep wielding it.

If you believed you could have direct contact with the Divine, who needed The Church? Oh. No one. Hmmmm. The inquisitional goal was to shut them up. Lock them away. Kill them. Whatever it took to Silence them.

Rather a nasty business, don’t you think?

In the early1600s, Beatriz de Robles, a forty-eight-year-old woman, was brought before the Inquisition. Although she seems to have been the only Morisca, a descendant of Muslims, condemned as an alumbrada, her spiritual heritage/identity easily bridged mystic Christianity and mystic Islam—Sufism.

“Both Sufis and almubrados underwent individual trances and group experiences that sometimes became extravagant expressions of emotion with dancing, weeping, ecstatic shouts, incomprehensible speech and prophecies.”—The Women of the Inquisition

Beatriz was guilty of experiencing religious paroxyms, going into trances, having visions, and fainting spells after taking communion. As a woman, she was most guilty of sharing these experiences publicly. However, her two-year sentence of reclusion for heretical mysticism was much lighter than most Moriscos received: “perpetual prison for women, years of galley service for men, and confiscation of goods.”

Before I share my discovery of an amazing contemporary Muslim mystic, I’ll return us to the 21st century in my next three posts. 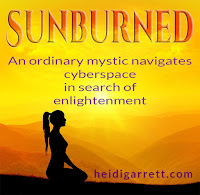